My take on FaunaDB and their GraphQL support 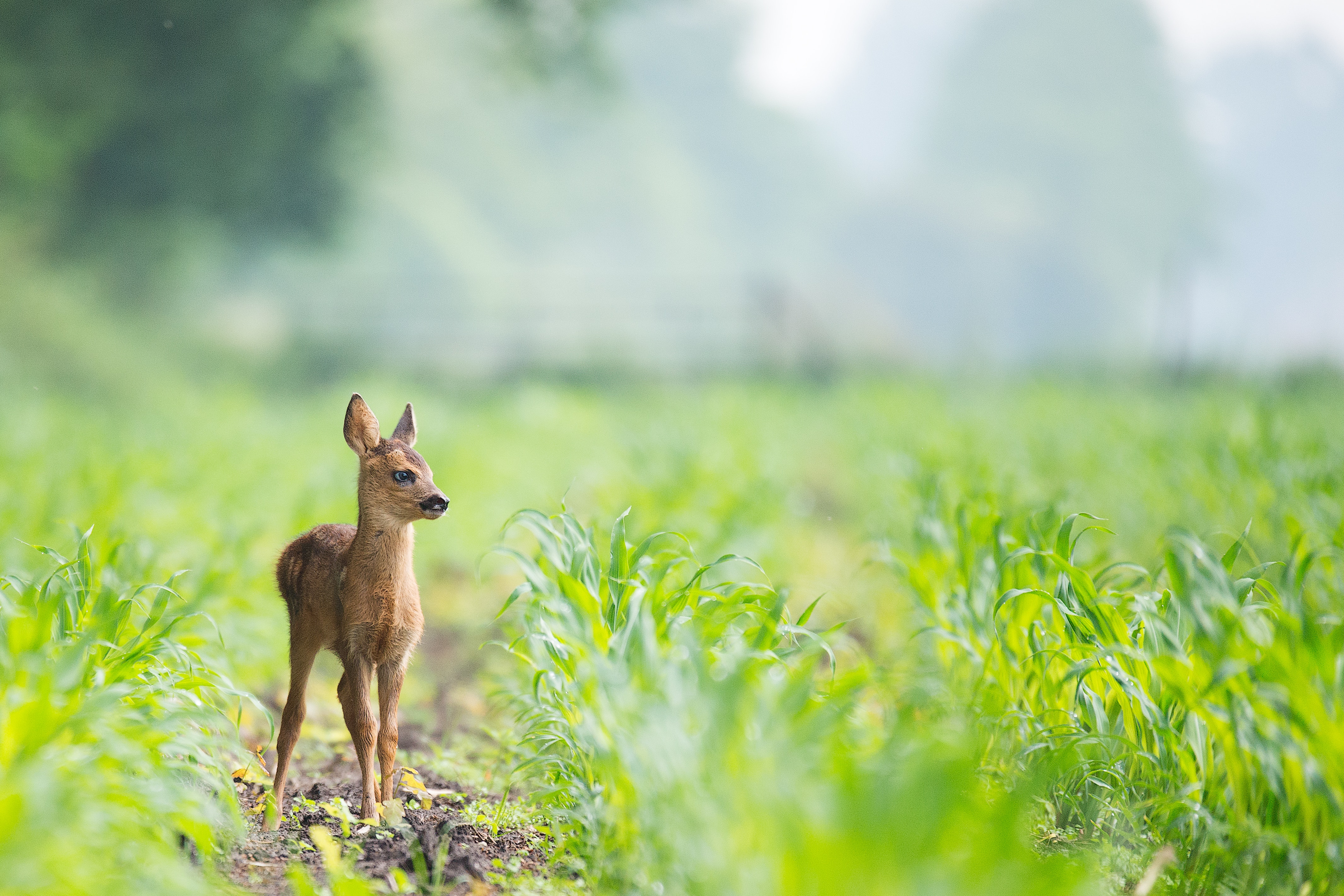 I have one or two projects I maintain on Netlify, in addition to hosting my blog there. It’s really an easy platform to deploy to, and has features like a content management system (CMS) and support for lambda functions (by way of AWS).

What I needed for my latest project, though, was a database. The only one that’s currently “integrated” into Netlify is FaunaDB: a NoSQL, document-oriented database. It recently boasted support for GraphQL, which I consider a big plus. At no charge and with a simplified setup, why not try it?

Fauna has a unique approach to managing transactions across globally distributed data stores. That’s a mouthful, but basically it ensures that database records don’t get out of sync when they’re updated from far and wide. This is a problem for global enterprises with high transaction volumes, but not for me.

I’m a chess player of middling ability and I want to set up data to do analysis of master-level chess games. SQL or NoSQL didn’t matter—I’ve worked with both and either would support my application’s modest needs.

I love GraphQL, and have been using it since 2016. I don’t want really want my GraphQL schema exposed on the client side, though. The way to get around this is to have lambda functions to do the GraphQL requests, and have the client use those functions as a sort of proxy.

I started with netlify-fauna-example*. This doesn’t use GraphQL; instead the example’s Netlify Functions use FQL: Fauna Query Language. You can execute queries via fauna shell, or by using a NodeJS client module. The following uses the client to insert a todoItem into the todos collection:

To use GraphQL, I need to create a database on Fauna, and then import a GraphQL schema. Once you’ve created an account on Fauna, you can do all this through their dashboard.

Once done, a set of collections (akin to tables in SQL) were created based on my imported GraphQL type definitions. Interestingly, new types and fields were also added to handle stuff like identifying instances and managing relations between types. For instance, my type for Opening was:

and when I go to the dashboard, open GraphQL Playground, and look at the schema, I see: 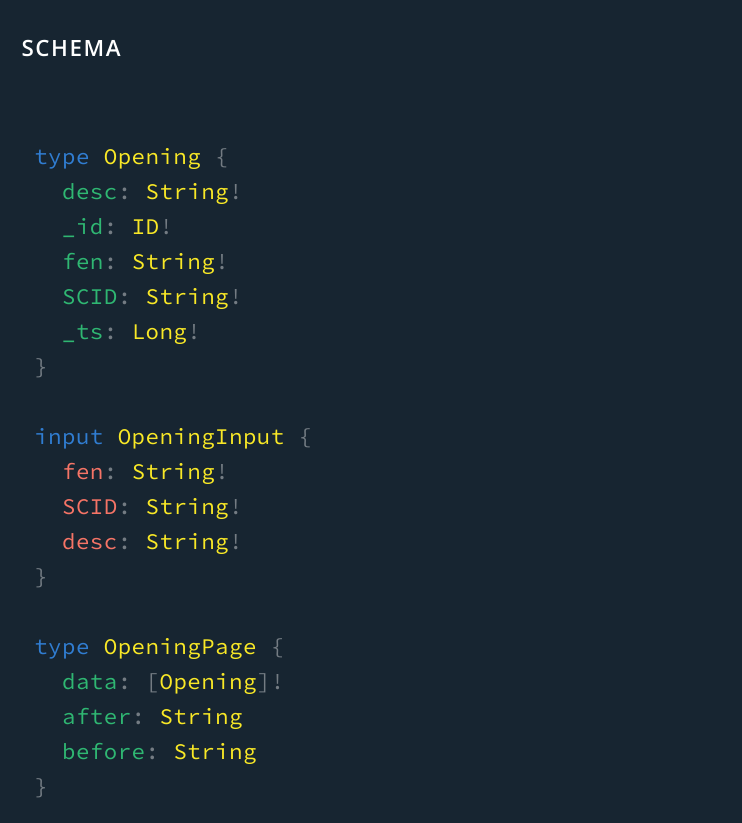 There are certain queries and mutations that will be automatically implemented for you by Fauna if you define them in the schema you created. When I defined the type to hold chess opening information, I may then include the following Query and Mutation definitions in my schema:

And FaunaDB will provide an implementation.

The original lambdas in netlify-fauna-example speak FQL. To convert these to GraphQL requests, just use a fetch library such as node-fetch, and make HTTPS requests to the Fauna GraphQL endpoint using an client like the one included with apollo-boost:

The code above requests the FEN strings for all the openings in the Opening collection.

Are we done now? No.

Fauna’s GraphQL support is in a functional but still formative stage. One of the things I wanted to do was have batch insert ability so I wouldn’t have to insert once opening at a time into the Opening collection. This mutation isn’t created by Fauna automatically (though it is ticketed feature request), so I had to define a resolver for it.

Fauna has a @resolver directive that can be used on mutation definitions. It will direct Fauna to use a user-defined function written in FQL; these can be written directly in the shell. For a collection of simple types like Opening, the resolver FQL is pretty straightforward.

First, I go to the FaunaDB Console Shell, and create the function add_openings:

Openings is an array, and the Map method executes Create call on each element. I then add a @resolver directive to my mutation definition in the schema I will import (referred to as a custom resolver):

You’ll notice in the mutation above that I refer to the OpeningInput type. In order for me to import my schema into Fauna, that type has to be defined. But… when I imported Opening, Fauna auto-generated that type for me. When I define it in my schema later (for the mutation), I essentially override that type. Since that generated type is used in generated mutations (ie., createOpening, singular), by overriding that type definition in my own schema I could possibly break one of the generated mutations.

The solution suggested is to not override the OpeningInput type, but to rename my input type to something like MyOpeningInput. That ensures that my import schema validates, and doesn’t mess with what the generated mutations expect.

The problem gets messier, though, when you use the @relation directive. That directive generates types that are used to relate two other type instances.

Here’s the relation in my import schema. Note the directive:

In order to store a Game, I need to have also a required Header (Opening is not required). The relation is maintained by a Fauna-generated ref field on the Header. The way this is defined for the mutation is through the use of a GameHeaderRelation type that allows the creation of both Game and Header in a single mutation. Here are the relevant generated types:

Now to add a game with the required header info, I can call the mutation like so, from within the Playground:

However if I want to create a batch upload mutation of games, I don’t have access to the generated GameHeaderRelation type, or the other input types. Without those defined, my import schema won’t validate if I try to use them in my bulk mutation definition. To reiterate: bulk mutations are a ticketed feature request, so they should be available soon. Yet this type of issue will arise regarding any custom resolver’s use of types.

I though for a minute that the solution would be to download the generate schema (from Playground), then modify it with my bulk mutations. However, I am overriding __the otherwise-generated types on import, which is not what I want to happen.

The workaround: write the resolver FQL

As stated, I need to ensure that when I create a function for my addGames resolver to call, there has to be a Header created first for each game.

And here’s the function definition for add_games:

I’m not an FQL expert (see acknowledgments), but this code is readable (from innermost outward):

I should note that one of Fauna’s engineers stated that maintaining references by hand is “tricky”. It requires understanding of what is going on beneath the covers. The @embedded type of relation may be easier to implement in FQL if the relation is one-to-one, as in this case.

Where to go from here…

Fauna’s support team and community forum members have been exceedingly helpful with questions and have even offered help with implementing FQL functions. They’re also forthcoming when onsite documentation is incomplete or wrong.

Performance wasn’t great: the bulk insert of a 1000 small documents executed in matters of seconds, which is slow. However I didn’t use pagination in my resolvers, so that may make a significant difference. It is also possible that the GraphQL features are in a slower debuggable configuration.

To write custom resolvers, it is necessary to master FQL. I’ll be honest and state that is not a query language that I’ve taken a liking to, but my experience is limited and your mileage may vary. It initially strikes me as verbose and “nesty”, though for simple CRUD operations it is fine.

I chose to try Fauna not for what it can do, but for convenience. I may now go check out DynamoDB and see if it more to my liking.

I’d like to thank Summer Schrader, Chris Biscardi, and Leo Regnier for their patience and insight.

* My life isn’t interesting enough, so when I clone a project like netlify-fauna-example, I will run npm update outdated and npm audit fix. I can expect to encounter issues when I do this, but in practice I usually resolve them in an hour or two.

Not this time. I deleted node_modules, package-lock.json, and even did a forced clean of the cache before reinstalling everything. Didn’t work. I eventually switched over to yarn, deleted the above (but left the updated version info in package.json alone) and installed. After a few hiccups, success! Here are the dependency versions I would up with: